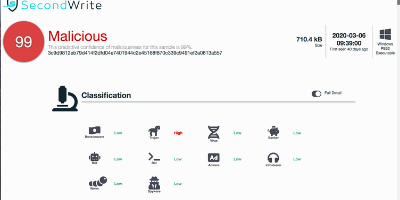 SecondWrite’s DeepView Sandbox analyzed this file last week and declared it to be malicious using our proprietary techniques. At the time of detection, this malware did not appear on many of the leading malware blacklists. A link to the full report is below and some key highlights follow:

– This executable has a PDB path

– Installs a hook procedure to monitor for mouse events

– Executed a process and injected code into it, probably while unpacking

– Drops a binary and executes it

– Checks the version of Bios, possibly for anti-virtualization

– Detects VMWare through the in instruction feature

– A process attempted to delay the analysis task

– Reads data out of its own binary image

Selection From The Report: