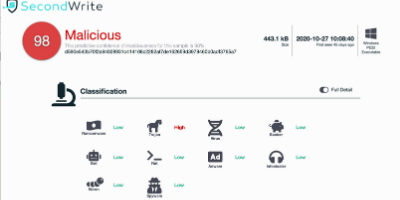 SecondWrite’s DeepView Sandbox analyzed this file this week and declared it to be malicious.  At the time of its discovery, all major malware detection vendors had not identified this file of malicious.  DeepView unique and patented methods – specifically in this case, force code execution (FCE) and program level indication (PLI)  – identified 4 indicators.  A link to the full report with descriptions and details is below.

Some key highlights and indicators follow.  Those discovered by DeepView proprietary method are flagged with [FCE] for forced code execution and [PLI] for program level indication.